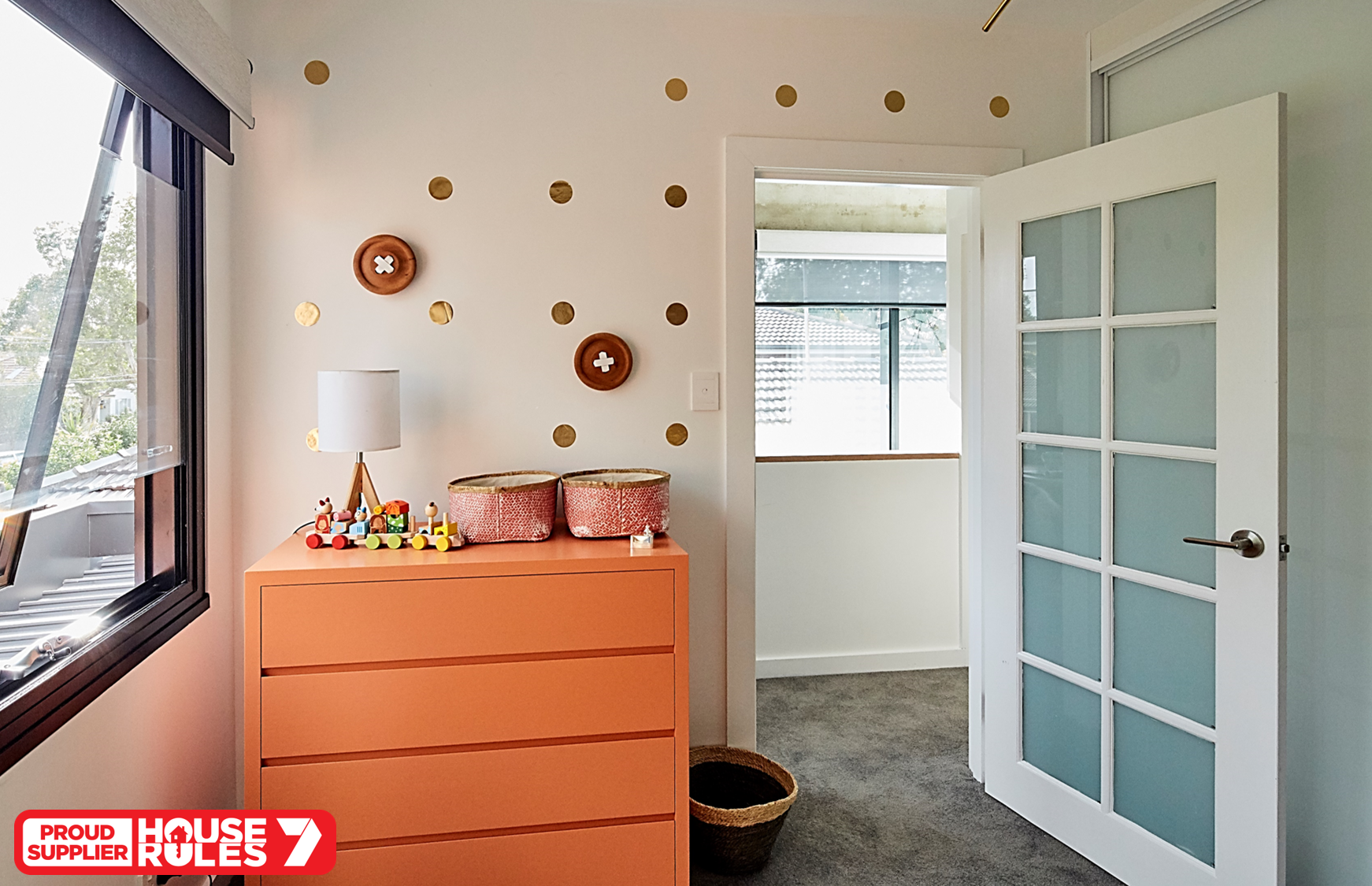 Peeking behind the ‘doors’ of House Rules

If you’ve been keeping up with this year’s House Rules, you may have noticed a few familiar doors. Hume Doors & Timber is a proud supplier of products used in the transformation of the contestants’ homes.

Just like you, we’ve been eagerly watching all the teams and their work progress. So, as the season draws to an end, we’re having a little look back at the Hume Doors used in season six – how many do you recognise?

House Rules hit the ground running. Teams got to know each other as they completed a mystery house transformation in the Sydney suburb of Rosebery for the first challenge of the season. The judges put the teams to the test with the following rules:

Teams got straight to work, and mother-daughter duo Leigh and Kristie decided to chase the first, second, fourth and fifth rules. They impressed with their chippie skills and wowed with their eye for style, especially in their amazing nursery.

The impressionists colour palette and urban edginess guidelines were nailed by the nursery’s bright dresser and wall decorations. The luxury and “café cool” goal was executed perfectly thanks to the team’s choice of internal door – a product which also followed the final rule.

The girls picked from the Hume Joinery Internal range, a product that combines traditional architecture with modern beauty. From the range, they decided on the LIN10 with translucent glazing. The door was perfect. It alluded to a classic-look café entryway and allowed natural lighting to give off warm, homey vibes. The translucent inlay of the door played with the space and made the small room seem much bigger. 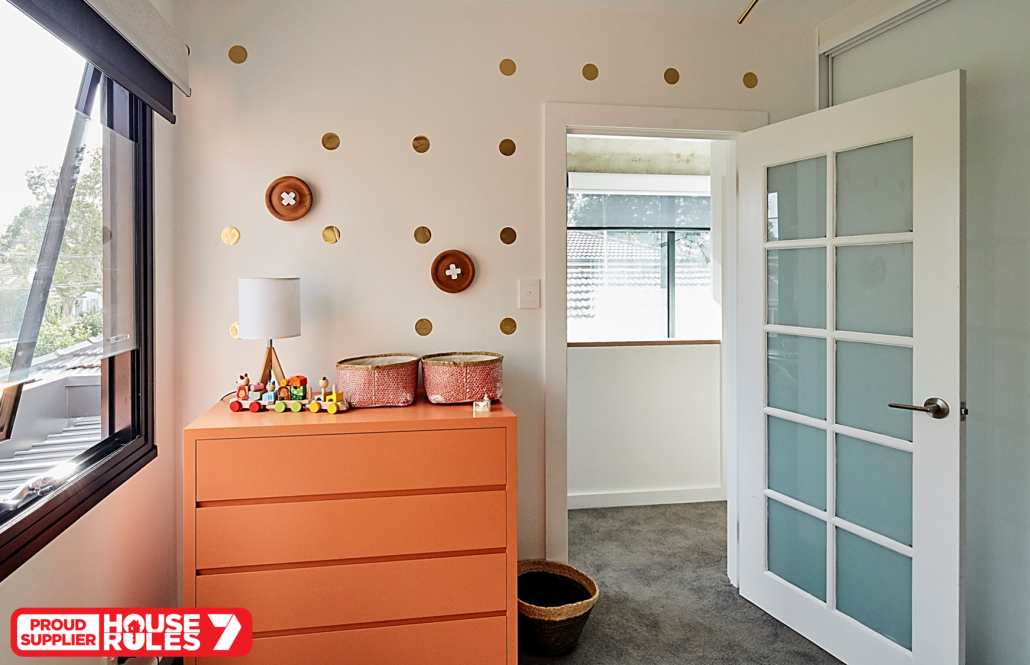 Young couple, Jess and Jared, were the first team to hand over the keys to their home and lay down their renovation rules. Contestants got to work and produced impressive results, with Jess admitting “it’s such a drastic change” to the way their home used to look. We were very impressed too, particularly by the bathroom makeover, with so much done in such a small space!

The team tasked with the responsibility of redoing the bathroom were asked to transform it from a lad pad, to a modern New York style space. As this would be Jess and Jared’s first chance to live together, there was a lot of pressure to produce a spacious, gender-neutral room. The end result nailed it, with an impartial but luxurious colour scheme and mixed textures. The tiled walls contrasted well with the timber vanity and the open shower allowed for a more roomy feel.

However, of course it was the door that brought the room together! Mel and Dave chose the HLR240 from Hume’s Linear Internal range. They painted it an appealing, neutral white which tied in with a variety of other features in the room including the bath, basin and smaller decorations throughout, giving the whole area a lighter feel and the illusion of more space. The team were going for contemporary luxury while trying to ensure both Jess and Jared would like the look, so the style and colour of this door certainly aided their overall delivery. 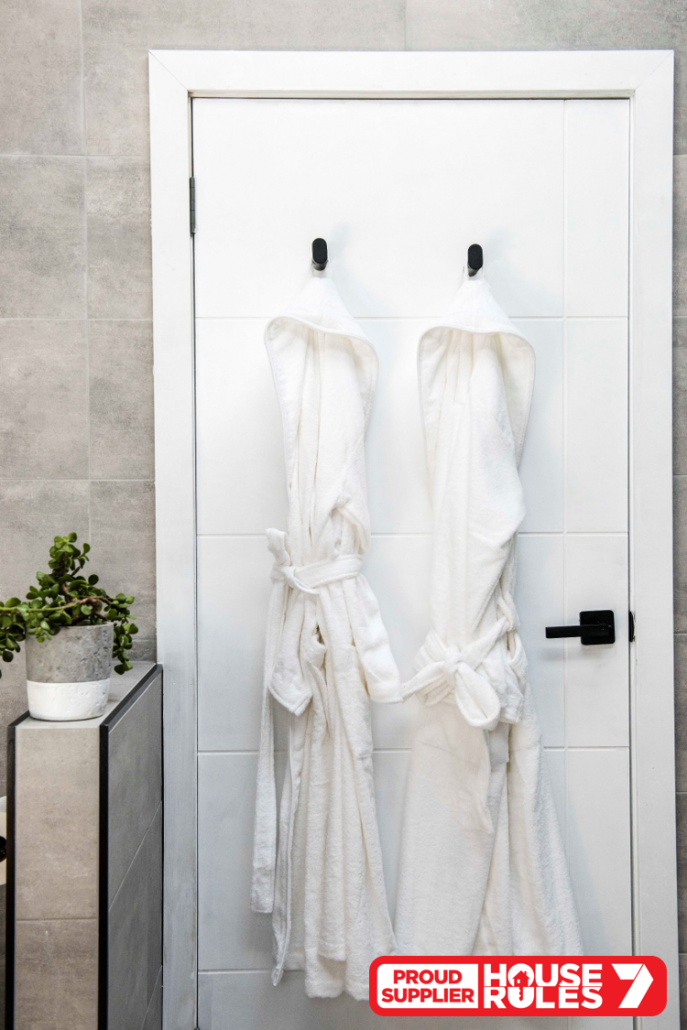 The Maryborough home makeover showed the teams’ renovating ability growing stronger even in the show’s early stages. Queensland homeowners, Josh and Brandon, were blown away, with shocked reactions and a “holy smokes!” as soon as they entered their new house. We were equally impressed with this entryway zone, done perfectly by power couple Jess and Jared.

The couple used wall decorations to hit rule number two – use blues and oranges, as well as rule number three – include pieces inspired by our hobbies. They also included a “secret room” in the entry hall, which used a similar timber to the front door and tied the whole space together.

Jess and Jared selected a front door that appealed to the request for a “blokey” renovation and made sure the products were wide enough to remain practical for the chippie brothers. They chose the XS24 from the Savoy 1200 range in translucent. The broadness of this product made it the perfect pick, and the exposed timber certainly fit the theme.

“We could’ve never imagined our house could look like that,” a very impressed Josh and Brandon congratulated the equal-second team during the reveal episode. 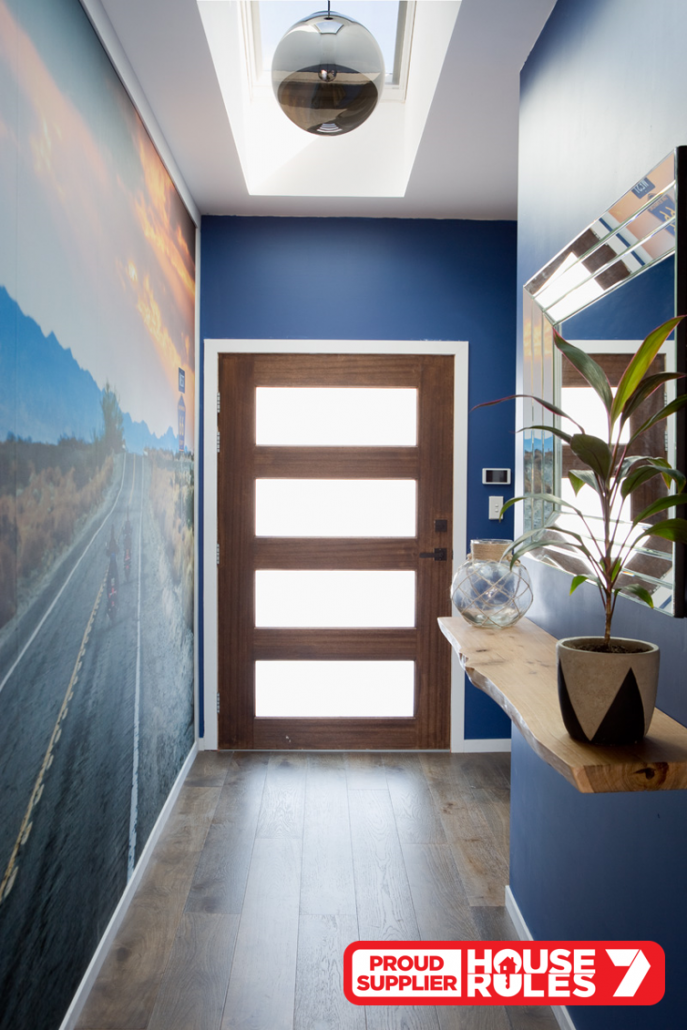 The Western Australia house saw a stunning new entryway for home owners Chiara and David. Couple Jess and Jared renovated the entryway and master bedroom, where they hit rule number two – be passionate with red, gold and silver – right on the mark, and followed rule number five – make the master suite an over-the-top, six-star hotel.

The couple used XN6D/C from the modern Newington range. The translucent glass insert allowed for the front hall to be filled with sunlight and warmth, whilst the bold red entrance door gave the space a fun pop of colour.

“Red on both sides!” Chiara exclaimed, to which David declared “that’s beautiful”, quickly followed by some overjoyed tears. It’s safe to say the pair were very happy with their new front door.

Although the judges were tough on Jess and Jared, we believe they produced a stunning entryway. Sadly, we think they were let down by their master bedroom. The duo had a lot of space to renovate in the short time and – although rule five asked for them to be “over-the-top” – they lost points for going overboard on wallpaper. It’s a shame they were judged so harshly, but we think their renovation looks great! 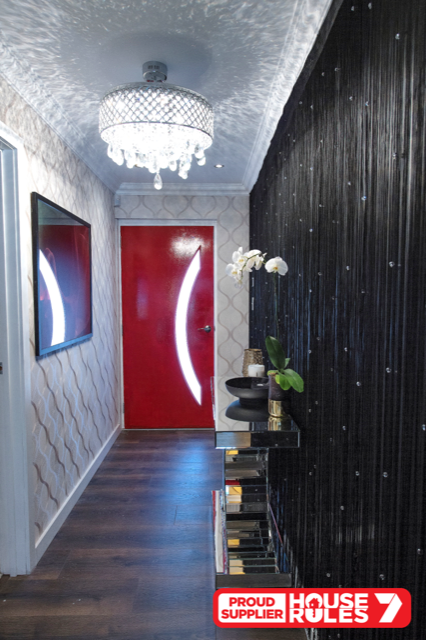 An unmissable homeowner reveal shocked House Rules audiences when Toad and Mandy’s rundown cottage was given a well-deserved (and long overdue!) makeover from the teams. We were especially impressed by Mel and Dave, who renovated the dining room and 16-month-old Layla’s bedroom.

The team was asked in their first rule to turn the 150-year-old house “into an elegant homestead”. Mel and Dave hit the mark in the dining room with feature after feature done to an amazing quality, but they even kept kicking goals in Layla’s bedroom. Here, they were able to fulfil Toad and Mandy’s request to “brighten their (daughter’s) world with bold colours and graphic shapes”. It may have been difficult to balance this playfulness with a sense of elegance but, with the help of their internal Hume door, the couple managed to do so with impressive results.

Mel and Dave picked the Oakfield from our Moulded Panel Woodgrain range. This product was a great choice because it was not only beautiful and fitting within the room’s theme, but its surfaces are pre-primed on both sides. It would’ve saved the duo crucial time, but not at the expense of style! This range offers different designs and the choice between solid or bi-fold doors.

It appears we weren’t the only ones stunned by these zones; the judges awarded the couple a perfect score of 30/30 and homeowners, Toad and Mandy, scored the renovation 9/10. Well done team! 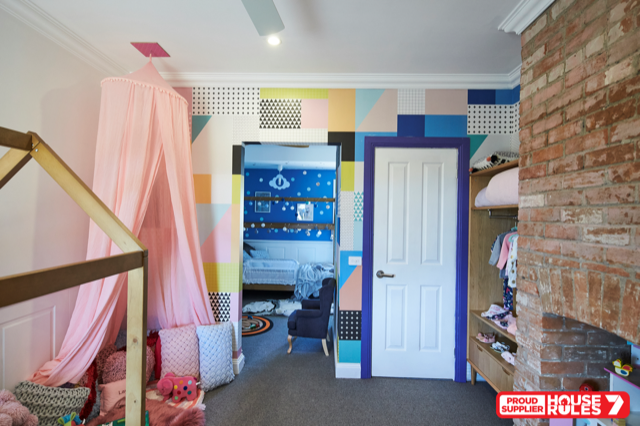 What a renovation Leigh and Kristie’s Rye home saw! Not only was it the biggest house of the season, but the Victorian home was the largest in House Rules history. The competitive couple were tough when it came to judging but even Kristie was brought to tears upon seeing her new home. Brothers Josh and Brandon – tasked with the mammoth responsibility of the entry, lounge and powder rooms – were able to produce an outstanding renovation, even under the pressure.

Rule two called for the brothers to “get earthy with copper, timber, limestone and concrete”, while rule three asked for a decked-out entry hall; “like a luxury yacht”. The boys renovated true to the rules and delivered some beautiful results.

Of their three zones, the entry was arguably the team’s best transformation. Even judge Laurence Llewelyn-Bowen was impressed; “I think the best thing we can do is leave (the home), it’s not going to get any better than this” he joked about the revamped space.

The grand front door Josh and Brandon picked was able to tie in with the design theme and overall space, whilst checking off both the second and third rules. They used the XS24 from the Savoy 1200 range, which showed off raw timber and gave the room a luxurious feel. The clear window panels in the door flooded the hall with natural light and was truly reminiscent of the sunny beach vibes it aspired to achieve. The product was perfect for the boys because it allowed them to pick from a range of timbers and glass options.

The judges were blown away with the duo, scoring their zones a total of 26/30 – even with their less than impressive powder room. Homeowners Leigh and Kristie were amazed by their efforts too, giving them a score of 9/10. It just goes to show that first impressions sometimes do count; your front door says a lot about what to expect from your home. 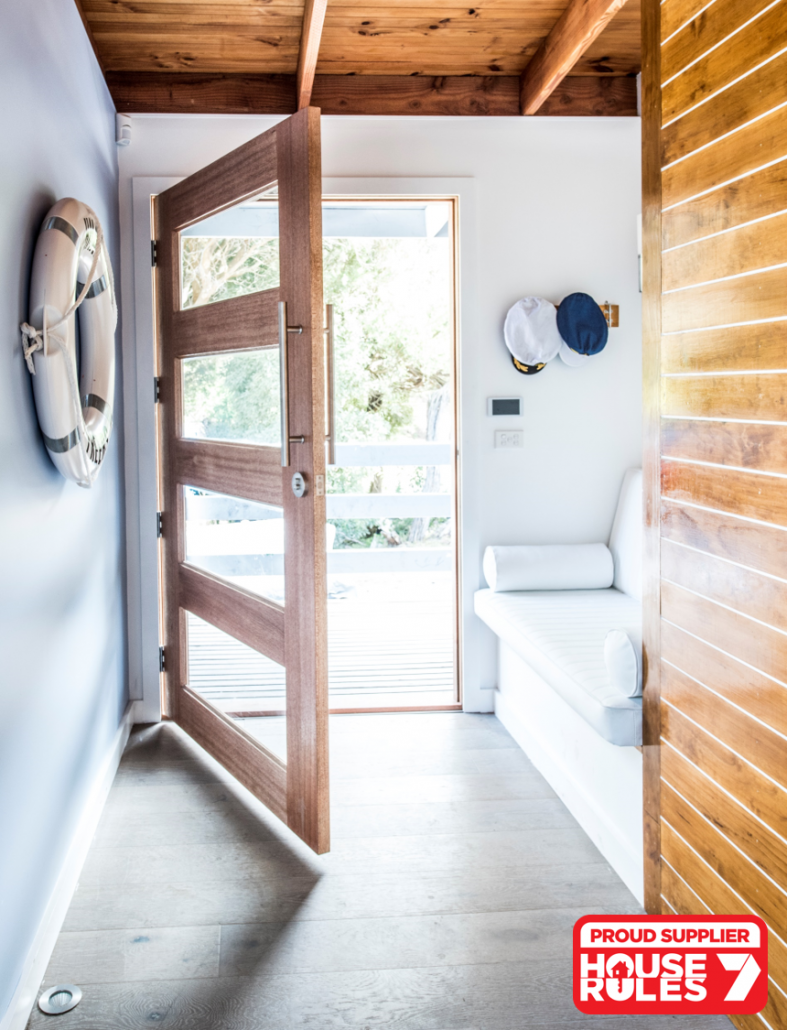 All the teams have done an amazing job and we’re so proud to supply our products for the amazing transformations we have seen across the series. Visit our website to check out our products.